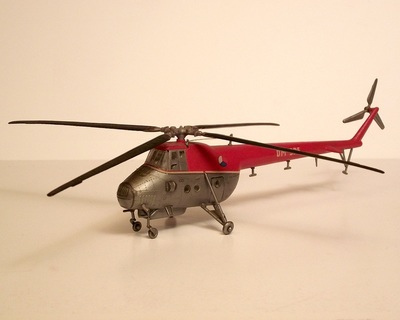 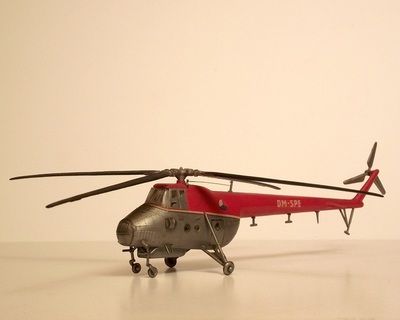 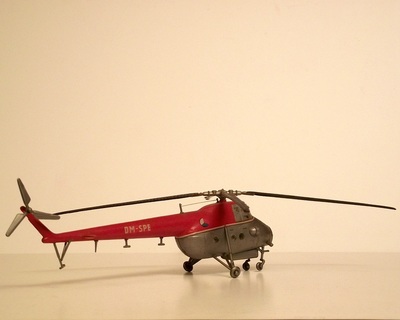 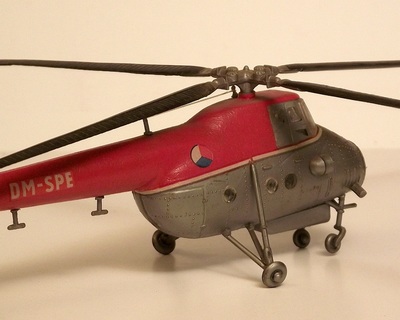 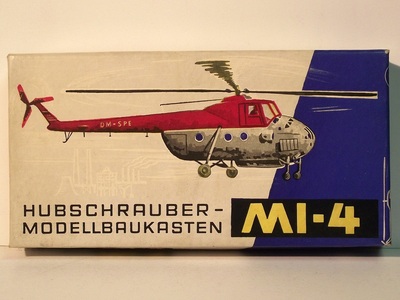 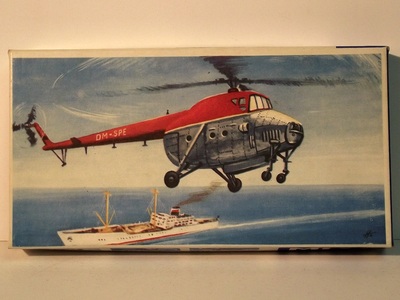 The MI-4 is a 1:100 scale plastic model kit made by VEB Plasticart from the former east Germany. I have two of these models, one is from 1970 (box art1 ) while the second one is from aproximately 1975 (box art2).This is a very detailed model, the top part was painted in red, using the included enamel paint during the assembly that took place around 1975. Included there were Soviet, Czechoslovak, Polish and east German decals. The MI-4 shown here uses the Czechoslovak marking.
Published October 25th 2015

The MI-10K was introduced by the USSR in 1963 as a replacement to the MI-6 and there were 55 units built. The MI-10 was used by both the Soviet Armed Forces and civilian airline AEROFLOT. Aparently one was used in the U.S. by a petroleum company. (source Wikipedia)
There were two versions of this helicopter, the MI-10 with long four-legged undercarriage and the MI-10K with shorter undercarriage, both have seats for 28 passengers in the main body. The presented plastic scale model kit was manufactured somewhere between 1974-1976 (there is no marking of the manufacturing date on the "Packzettel") and assembled around 1977. The VEB Plasticart model is the shorter undercarriage version presenting the MI-10K in 1/100th scale. The kit consisted of 56 parts molded in white, silver, black and clear. Back in those days there was no paint available either in the box or separately so the only way to finish the helicopter was to use the included AEROFLOT decals. You can see the state af the decals applied in 1977 in the above pictures taken in 2017. The wonderful boxart painting is signed by REICH.
Published April 30th 2017

In re﻿a﻿lity:
This is the JAK-24P (YAK-24P) passenger helicopter built by soviet manufacturer Jakolew (Yakolew).This version, the JAK-24P was the last version of the military JAK-24. It was presented in 1961 as a 39 passenger helicopter but in the end it was never manufactured.
The model:
The JAK-24P plastic scale model was manufactured by VEB Plasticart between 1968-1991 and the model presented here was made on 18th July 1971 (see attached "Packzettel") This was the second version of the model with box art signed by REICH and it presents the helicopter in front of the M. V. Lomonosov University Moskow. It is a 1:100 scale plastic model with AEROFLOT (аэрофлот) decals. The plastic components were made of white, black and silver plastic. The two aluminium containers seen in the picture are unopened since 1971, one contains glue while the other silver paint. ​
Included building instructions were multilanguage and the box contained the following text in 4 langauges:
FLUGZEUG-MODELLBAUKASTEN
AIRPLANE MODELKIT
BOITE DE CONSTRUCTION POUR MODELE D’ AVIATION
CAJA DE CONSTRUCCION DE MODELO DE AVION
Model no. 8460/135/18   Art.-Nr. 5018
Published March 30, 2015